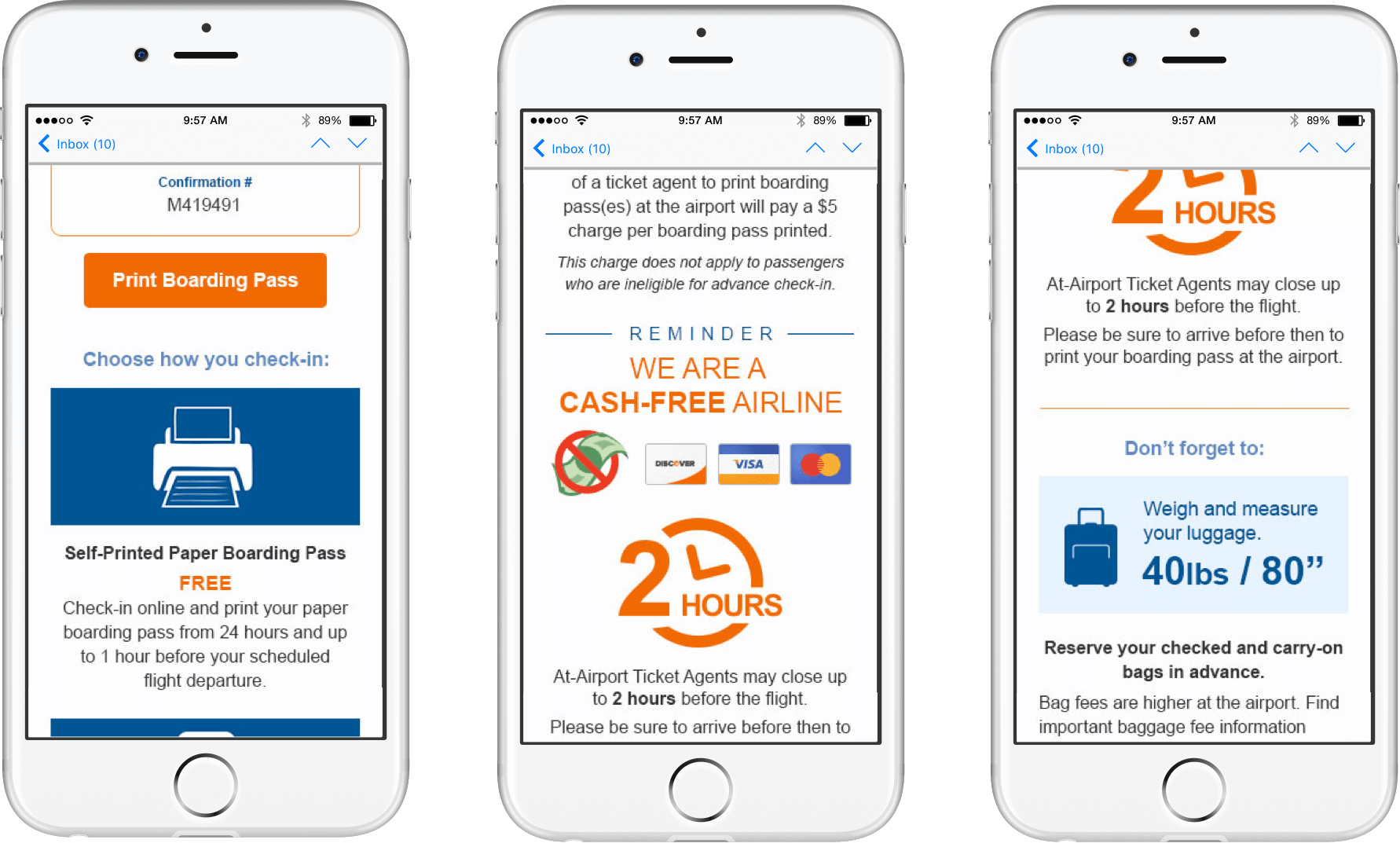 Most airlines make revenue on upgrades and packages with 3rd parties.

A drip campaign was started that would take customers outside of the weekly marketing campaigns once they purchased tickets, and put them into a drip pipeline.

My task was to design emails for each leg of the drip campaign, that was variable by segment.

So if you were a single traveler who booked a car rental, but not a hotel, you’d get a different set of messaging from a family who had checked baggage and no packages.

Each email would change according to an individual passenger and how near their departure date was. The calls to action would vary as well.

One example of different campaigns for the same upsell package would be paying to select your seat.

A single passenger has a more relevant message and image that’s focused on legroom or a window seat.

But if you purchased tickets for multiple passengers, you’d get messaging about sitting together.

I made it a point to change the old template design, which kept all the messaging in a giant image, with the disclaimer being the only real text.

As most email usage is now mobile, I wanted a responsive design that would emphasize typographic hierarchy at any viewport size.

Even though you can’t use a custom font across all email clients, a well-set default font can work just as effectively as a fancy brand font.

I also wanted to make sure that if an image were blocked, the message wouldn’t be lost entirely.‍

If you’ve ever flown on a low-cost airline, you may have noticed a few differences from the larger airlines. Front desks close earlier, luggage weight limits are lighter, and in-flight snacks operate differently.

I wanted to highlight the lesser known parts of budget travel for many who were new to it, and alleviate the frustration that inevitably comes from those inconveniences.

I did so by chunking pertinent information into easy to read groups so that you can have your flight information at a glance.

I then highlighted the flight restrictions with illustrations, because most people only skim the content. The images were designed to stand out in what would otherwise be a sea of copy about the rules. No one wants to read the rules.

Ultimately, my goal in redesigning these transactional emails was twofold. I wanted to be able to cut down on call center complaints since they mostly boiled down to a lack of good initial communication.

And I wanted to remove a small part of travel stress for Allegiant’s passengers; airports are stressful enough as it is!